What’s in a Name? Everything!

On Tuesday, September 26, hundreds of students, faculty, staff, and community members interrupted a “debate” on whether to consider changing the name of a University of Michigan building. This “conversation” isn’t new; it’s been considered for some fifteen years as, meanwhile #CCLittle, a eugenicist, racist, and ableist, has continued to be honored on a campus building, and black and Latinx students have continued to experience small numbers in the student body and myriad white supremacist indignities and injuries. The simple yet powerful demands on Tuesday, as part of AGITATE: a week of action against anti-blackness and other forms of racism (#BBUM, #ReclaimingOurTimeUMich), was that C. C. Little’s name not only be replaced, and immediately, but also that the building be renamed after a black woman, especially a black female scientist alumni. Needless to say, the all-white panel — and more to the point, part-of-the-power-structure officials — holding the debate did not meet those demands.

Last night, in what looks like an act of solidarity, the barbarism in the current name was made explicit: “C. C. Little Eugenics Building,” now said the sign, with “blood” splattered near chalk reading “CC Little has blood on his hands. Rename me now!” 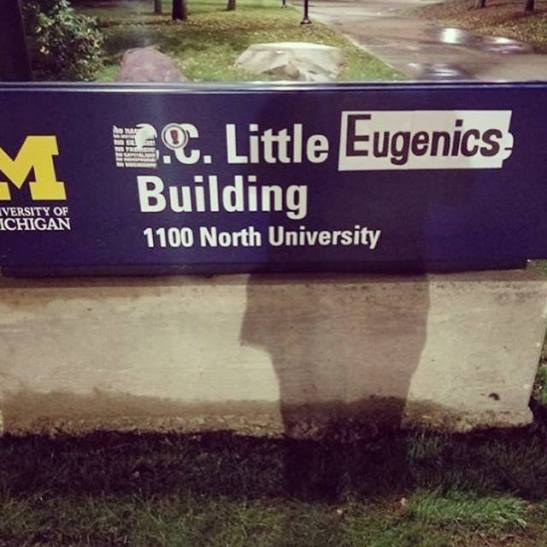 This entry was posted on September 28, 2017 by Cindy Milstein in Dispatches from Rebellious Spaces, Uncategorized.