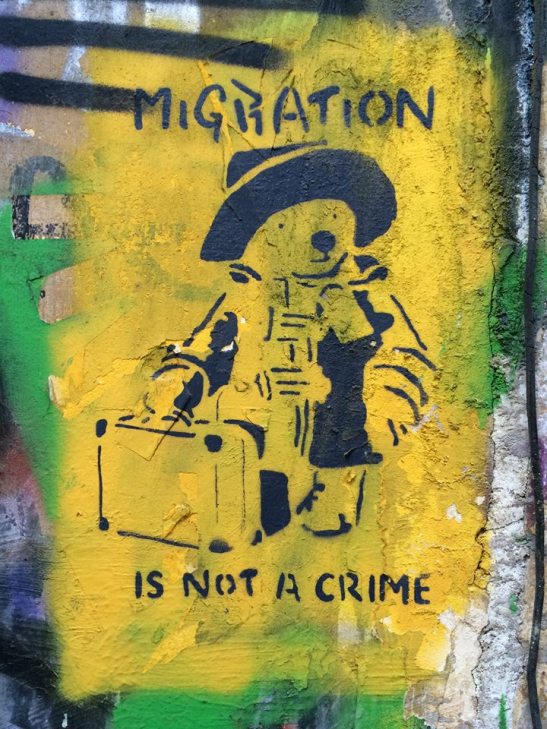 It was hard for me to comprehend, given the increasingly sanitized streets of most North American cities, the commonplace magnitude of street art in Athens during my recent trip to Greece. Or rather, it was impossible to contain the exuberance I felt on seeing it. Nearly every time I set out for a walk, I ended up kilometers or hours from my “destination,” instead pulled along, as if a pup following a scent, by one graffiti-covered wall or stencil-covered building after another — and another and…

The millions and billions of individual pieces of street scribblings — conversations and warnings and commentary — spell life still, spell resistance still, even if the life and resistance are being drained by austerity. In North American cities, it largely feels like the life and resistance have been displaced, like so many of the urban inhabitants who don’t fit in what are now largely refuges for the super rich (and trashbins for the remaining super poor, before they, too, are disposed of). I kept seeing Athens as someday “cleansed” of its aliveness — meaning anything or anyone that doesn’t fit into the narrative of the world’s global elites.

All of the anarchists in Athens I spoke with brushed off the possibility of their city’s core being transformed into a playground similar to Manhattan or San Francisco, Vancouver or Toronto. “Too poor,” “too chaotic,” “too crumbling,” “too big,” “economic crisis.” Maybe they’re right, and Athens will be left alone — alone to suffer, alone to rot, alone to still, at the same time, contain more humanity because it’s not on the map of capitalism. Already, out of necessity, there are burgeoning amounts of “solidarity” projects — the bare minimum to stave off complete unemployment and depression, while offering the bare-bones of mutual aid in order to get by, somehow.

Yet I also heard talk of the Troika, the European Union, the IMF, Chinese investors, US German investors, other investors, already circling like vultures to pick off big pieces of Athens and Greece for an enormous feeding frenzy of profit later on. Once austerity has broken backs, sent more to suicide, sent many young folks packing. Athens reminded me so much of Manhattan and San Francisco when they, too, were meccas for rebellious walls — walls that can be criminalized and silenced and cleaned steel-gray-dull sleek. Call me cynical, but after seeing the unfolding logic of how Manhattan and San Francisco were battered into shadows of themselves, it’s clear Athens can be made anew for the few, too.

Maybe, like this innocent-looking Paddington Bear stencil on a wall in the anarchist neighborhood of Exarchia in Athens, people have to hang onto “navïeté” that is actually a cover for not tail-spinning into total despair. “Migration is not a crime.” But we know it is.

Athenians watch a wave of refugees — cold, hungry, dirty, scared, anxious… — pass through, quickly, because they’re more worried than ever about getting north as borders, left and right, close to them. Some in Athens offer squatted refugee houses and other forms of mutual aid to those made migrant, made people without home, with a future uncertain. Yet somehow, Athens is presumed “safe” from becoming a place that will displace its own inhabitants, sold off and remodeled for the rich, with street art a thing of coffee-table “history” books. Or if not renovated, then made worse by memorandums and austerity measures and governments that do nothing and capitalism that destroys everything, until the only ways to stay live all become a crime, until people “voluntarily” must migrate elsewhere.

Life right now, where one can still find it, is being written on walls as anonymous cries against all that is and all that should be.

Meanwhile, borders and fences are going up at an accelerated rate, new detention centers and hot-spots are being created willy-nilly to “concentrate” people in “camps,” luxury high-rises and lavish startups are growing like mushrooms on top of places that used to be neighborhoods, wars and disappearances along with militarized rape and torture are scattering and shattering people.

On my return to Turtle Island, instead of street art, I scan the walls of social media. That is also a sign of “no life” in North American cities. That we are largely compelled to seek “the art of resistance” online not on the urban geography we walk by daily.

So instead of walks that joyfully lead me further and further astray, I’m stuck to my seat, feeling helpless or hopeless, or both, looking at a myriad of images and reading personal accounts of the mass displacement and mega-migration being forced and enforced on most of humanity, especially the harrowing accounts of the “refugee crisis” — always at the cost of life.

That is the crime.

If you want to get word when I put out new musings, sign up at cbmilstein.wordpress.com. Enjoy, share, reprint, post, tweet any of my writings as long as it’s free as in “free water” and “freedom.”

This entry was posted on November 2, 2015 by Cindy Milstein in Art & Culture of Capitalism.